Signup for our tips and eRecipes!

Cupcakes are a popular commodity across the world. From cupcakes in London and the UK to the west in North America, the cupcake is a true winner among desserts.

The history of Cupcakes dates back to the 18th century where they made their first appearance sometime in the late 1700s. They began to show up in books in the early 19th century. Cupcake was mentioned in “Seventy-five receipts for pastry cakes and sweetmeats in 1828 in Eliza Leslie’s Receipts cookbook

It’s had many contenders over the years, but none of them have come close to topping the cupcake. It’s here to stay.

Cupcakes, once considered a treat for children’s parties has now earned its place quite rightfully on the mainstream. The children’s cupcake with loads of sugary frosting and artificial colours and flavours isn’t very popular anymore. Instead, adult cupcakes have taken reign with inventive flavours and impressive presentations.

In the last decade, cupcakes popularity has grown into an empire. The cupcake industry is now a multi-million pound industry, and it has had quite a history.

Since the recession, the sale of cupcake has skyrocketed alongside its popularity, In the UK alone, the number of cupcake retailer who passed the VAT threshold (£77,000) increased by 325% in 2013. This is a significant number so much so that it has even raised the question, “is cupcake bringing us out of recession?”

Although, there are evidence documented which suggests the sales of “comfort food” and “permissible treats” (Such as chocolates and sugar confectioneries) as well as premium line shopping temporarily increases sharply. This sharp increase quickly declines once economic stability begins to kick in, a phenomenon known as “Lipstick effect”. However, cupcakes seems to have made a strong stride but also sustained increase in sale and popularity right through since the early 2000 with Google monthly search term on cupcake of 700,000 in 2015 and Cupcakes London 1500 times. 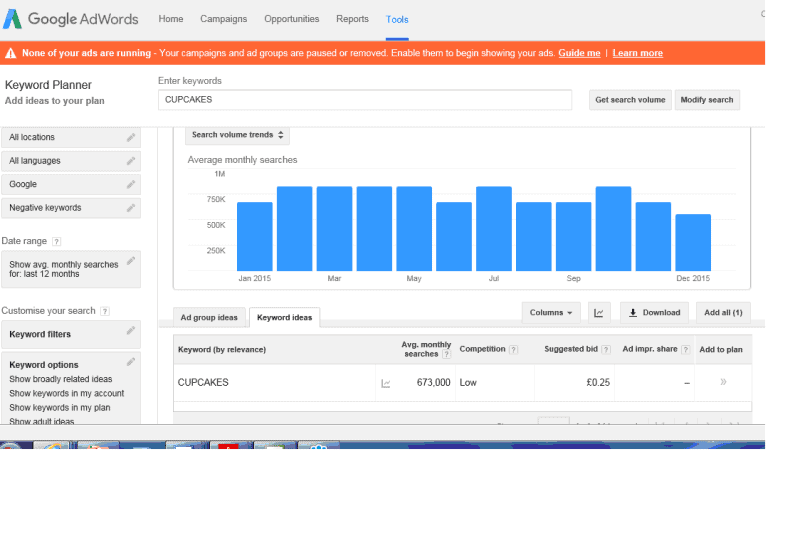 The search term has cupcake is an incredibly popular searched term according to Google trends, and more and more people search for it everyday. Among search terms, many people in the UK are seeking cupcake delivery in London, and where one can find a cupcake in London and surrounding areas.

It is obvious that despite the recession, people still treated themselves to a littlie indulgence of cupcake, a small affordable luxury to lift their spirit. The evidence of increase in demand is clear from increased popularity of Cupcake stalls and specialty bakeries cropping up in London and across the UK.

Every year, we see a slew of different dessert trends. Some stick around longer than others.

From gourmet milkshakes loaded with toppings coined ‘freakshakes’ from Australia to whoopee pies (that didn’t succeed) to cake pops on a stick These trends have come and gone, and 2016 will bring many new dessert trends. But the cupcake isn’t going anywhere.

Where did the popularity of cupcakes in London, and the rest of the world begin? Cupcake popularity surged in the early 2000s due to the hit TV show Sex and the City. Carrie Bradshaw was seen eating a cupcake on TV, and since then, the cupcake industry exploded, and traveled over to Britain.

Following the cupcake’s appearance in Carrie’s hands, a slew of cupcake shows have had huge successes, like Cupcake Wars and The Great British Bake Off.

In fact, there is even a whole week dedicated to celebrating cupcakes called Cupcake Week. It was a huge success in September 2015, and Cupcake Week is already set-up for 2016.

The dessert’s surge of popularity has a huge growing demand that is making space for new ways of customer service. It made way for cupcake delivery in London, the UK, and the US, among other cities and countries.

Though the cupcake is not something new, it is an old favorite that even the newest dessert trends cannot overtake. For creative bakeries and small cupcake shops, this is great news.

What will 2016 bring? A slew of creative, rich flavors and toppings like never before. It’s all about flavor and creativity. But of course, classics like carrot, chocolate, vanilla, lemon raspberry, chocolate, and red velvet including brownies all hold their thrones among popular flavors.

In fact, red velvet reigns above them all. There are probably more red velvet recipes around these days than any other cake.

And you don’t have to visit your local shop to grab a delicious bite; cupcake delivery is available for many who live in large cities in the UK. For instance, there is cupcakes delivery in London, from cupcake London bakeries, coffee shops, and creative baking shops.

Like any dessert trend, it’s bound to appear at wedding ceremonies and celebrations. The cupcake is growing in the wedding industry too. 1 in 5 couples will choose a tier of cupcakes as their cake instead of the traditional wedding cake. It has become a must-have wedding offering for guests.

The big question is: how many cupcakes is Britain consuming? There are roughly 44,000,000 cupcakes consumed in the UK every year. That’s about £23.5M pounds worth of cupcakes! And that doesn’t include homemade cupcakes.

That’s a lot of cupcake lovers.

It doesn’t look like cake pops, French macarons, or whoopie pies will get a leg up on the cupcake. That’s okay.

Let’s look forward to a new year of cupcakes.